My Professional Self Portraiture During the Covid-19 Pandemic

It had been a hard time for many people during the covid-19 pandemic. Many businesses were forced to closed and eventually shut down. My learning centre wasn't spared either. So I spent my time at home as well as helping others in planning for their final retirement and resting place at Nirvana. (I am an agent at Nirvana Asia Group in Malaysia, a leading company in memorial park management and bereavement services.)
I received a message one day that I should get my photo professionally taken at the studio for future corporate use. I was told that agents who are performing would be praised and their photos put on display as a form of encouragement and appreciation for their achievements.
As Malaysia was still under Movement Control Order due to the pandemic, all studios were closed and their services prohibited.
Luckily for me I still had my studio lights at my learning centre (which had to be closed due to the pandemic as well), and so I had my self portraits taken there.
Nothing fancy as I put on my old college graduation suit, stood in front of my blue wall in the playroom (with my suit feeling a little tight, haha), connected my smartphone using the Sony Image Edge Mobile App to the Sony A7R3 + Sony 24-240mm lens and attached a flash onto the camera. Why on the camera? Because my studio flash remote ran out of battery! So I needed the on-camera flash to activate the studio flash instead.
Anyway, to cut it short, my photography skill got rusty and it took me awhile to get comfortable with the equipment.
Here is one of the photos taken. 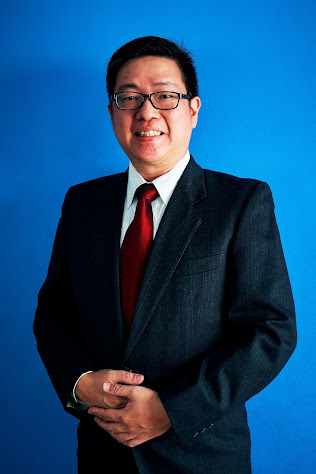 What do you think? Not bad, right? 😉
I encountered mainly 2 issues during the shoot. First is the focusing of the lens while the photos were being taken. The photos may not be accurately focused. Second issue that I noticed was the reflection of the light on my glasses. So I had to try out different angles to minimise the reflection.
I also realised that I was getting too big for the suit. 😂
By the way, contact me to find out more about Nirvana life planning anytime. The best time to preplan is always now. Preplanning can really minimise financial issues or arguments within family members in the future.
Whatsapp me if you are interested in Nirvana pre-planned bereavement services / funeral packages. We also have burial sites and urn columbariums in KL, Semenyih, Shah Alam, Klang, Ipoh, Melaka and throughout Southeast Asia. It's a one-stop funeral planning service for non-muslims.
I can help you to preplan your final retirement and resting place.
My Facebook page is at https://Facebook.com/nvsetiaalam
Take care and stay safe.
Posted by Edward at 8:56:00 AM